According to Marriott International’s Second Annual U.S. Summer Travel Trends Report, travelers are planning to take an average of two trips this year, and among families with children it’s becoming more common for the kids to choose the destination. Interestingly, for the second year in a row, cities are at the top of their lists.

Marriott’s report gathered data from more than 1 million searches and bookings on Marriott.com, and specifically looked into the top five destinations for vacations during this summer"s biggest travel weekends. Here is what it found:

For the first big holiday weekend of the summer, New York City topped the list of the most booked destinations. Orlando came in second, followed by Atlanta, Chicago and finally San Diego.

Outside of the U.S., Marriott International’s data showed Toronto and Cancun, Mexico, were the most searched destinations in the Americas for the holiday.

Independence Day falls on a Wednesday this year, and Houston is positioned as the biggest draw for the holiday. The Bayou City is followed by New York City, Orlando, Seattle and Chicago as top destinations. 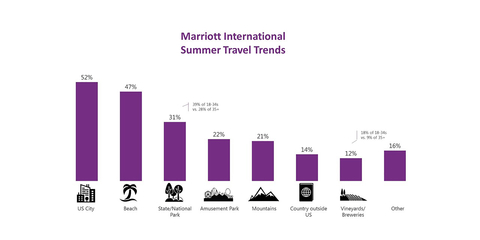 According to the survey, travelers are planning to take on average 4.4 days off this summer, while families with children are planning additional time off. The three biggest draws for weekend travelers are major cities, beaches and national parks, which is reflected in the top five destinations for weekends.

For these weekend trips, New York City came out on top again. It was followed by Chicago, Orlando, Atlanta and Seattle. Toronto and Vancouver, British Columbia, were two of the top choices for international nonholiday summer weekend trips.

4. Travelers hold out for summer

The report found that, unsurprisingly, half of consumers take their longest vacation of the year during summer. Consumers also plan on taking an average of two leisure trips during summer months, and the top three activities guests enjoy most during summer involve the beach, pools and restaurants.

Other data from the report show millennials are likely to increase the number of leisure trips this year versus last year. While cities, beaches and state or national parks are the top three planned travel destinations for summer, 12 percent of travelers are also interested in visiting vineyards or breweries.

Family travel is also expected to be more popular this year than last year, with 64 percent of families taking longer vacations during the summer. In addition, families with children have more days off during the summer and tend to plan more leisure trips. Children aged 6-12 tend to have the most involvement in choosing trip destinations.